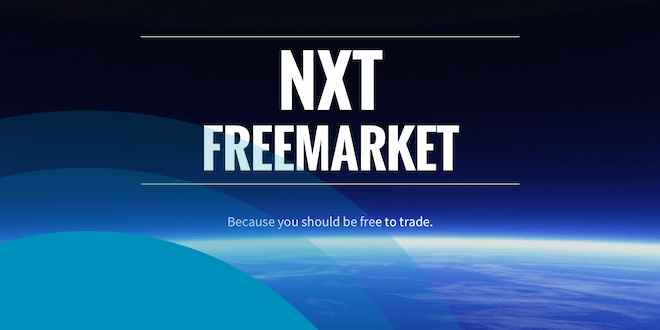 A new online marketplace will allow merchants and customers to buy and sell any goods and services they want, wherever they are in the world, with low fees and no interference.

NXT FreeMarket (NXTFreeMarket.com) is built on the popular cryptocurrency platform NXT, which already boasts a decentralised Asset Exchange for crypto-stocks and a Digital Goods Store for music and other media. FreeMarket extends NXT’s reach into the physical world, bringing the benefits of blockchain technology to a new sector and audience.

Free trade as it’s meant to be

‘The decentralised approach offers a number of significant advantages over other sites in this space,’ said Mr Knuckle, one of the site’s founding members. ‘NXT is a powerful platform and FreeMarket has leveraged that functionality to benefit users. Without a central corporation administering it, we can create a site that puts the user first and charges very low fees. There is no single point of failure: because FreeMarket lives on the NXT blockchain, it is resistant to attack by anyone who would deny you your right to trade peacefully. FreeMarket is just that: a truly Free Market.’

Communication between buyers and sellers is carried out by private messaging, protected by powerful public key cryptography, and no IP addresses or private information are stored on the blockchain. NXT’s fast one-minute block times mean transactions can be completed quickly, as well as at minimal cost.

Merchants will be able to list their goods for free until the end of 2014. From 2015, there will be a flat fee of 7.77 NXT, currently around $0.19 (the number is a reference to anonymous developer jl777, who is responsible for many well-known NXT projects and advised the founders on FreeMarket). Communication between merchants and customers will cost the standard transaction fee of 1 NXT, though this is expected to be lowered in the future. It is therefore extremely low-cost, especially for buyers.

Mindful that users want more than just low fees, the site’s developers have worked hard to create a simple, elegant interface that allows customers to search for goods and specific categories easily, and select from multiple shipping options. Merchants can display up to three images alongside their listings.

Unlike most other auction and marketplace sites, FreeMarket will not use any third-party payment processors like PayPal. Instead, payments are made directly from the customer’s NXT wallet, which can be downloaded from www.NXT.org. This ensures a genuinely secure, fast and private experience, and allows merchants and customers to trade across borders without incurring unnecessary costs.

NXT FreeMarket launches on Sunday 12 October. There will be no listing fees for the rest of 2014. To trade freely or find out more, visit NXTFreeMarket.com.

17 thoughts on “NXT FreeMarket launches with no fees for 2014”