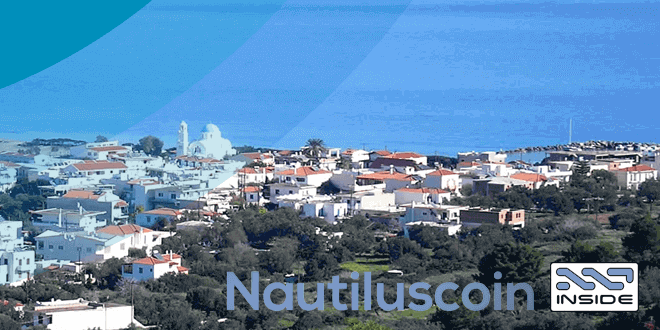 Today a press release from Nautiluscoin announces the launch of a full economic ecosystem, built on the Nxt blockchain. The launch event of the Drachmae Ecosystem will take place on September 26, 2015.  Furthermore, Brian Kelly Capital (BKCM LLC) will be making a seed investment in a new entity that will deploy this ecosystem globally, first targeting developing micro-economies in Latin America and Africa.

“We are pleased to announce that we have formally joined forces with the Drachmae Project and have developed a full economic ecosystem for the island of Agistri”, Nautiluscoin writes. “This ecosystem includes a fully functional mobile banking system, a B2B ecommerce platform, and a travel-booking site, all fueled by Nautiluscoin. This ecosystem will be rolled out on the Greek island of Agistri on September 26, 2015.

We are providing the tools for the municipality and businesses of Agistri to investigate ways of generating new revenue via our blockchain-based ecosystem. Businesses will be able to save money via the B2B platform by connecting directly with suppliers, while at the same time offering discounts to travellers via the travel platform. Powered by Nautiluscoin, the ecosystem will offer efficiency and simplicity, providing tourists with a simple one-stop shop for all aspects of booking a holiday.

We are focused on the end users of the currency – the businesses, citizens and visitors – this is our community. This proof of concept will illustrate how digital currencies and blockchain technology can benefit a community. To that end, the communtity in Agistri will be actively involved in the project and will share ownership and revenue from the Drachmae Project.

The mission of the Nautiluscoin project is to use digital currency and blockchain technology to bring money into an economy. While digital currencies have been successful at providing a means to remove capital from an economy, few have successfully shown that adoption and use can drive economic growth – the Nautiluscoin project is about to change this.

The Drachmae Ecosystem has been built using the NXT Platform and Nautiluscoin will soon be swapped onto the NXT monetary system. We have chosen NXT because of its superior technical capabilities, security and community support. The business orientation of the NXT community will be the foundation on which we build our ecosystem.

The NXT Foundation will be assisting with the coin swap that will commence on September 18, 2015. We will post the coin swap instructions on Bitcoin Talk on Wednesday, September 16, 2015 and the offical commencement will be announced via Nautilsucoin’s Twitter account.

The NXT Foundation will also be assisting with the structure and the operation of the Nautiluscoin community, which includes the businesses and citizens of Agistri who wish to join the project. This project would not have been possible without the expertise and support of the NXT Foundation. The NXT team and Foundation have been integral to realizing this opportunity to utilise the power of blockchain technology.

We will also be hosting a Hackathon event for developers to explore our blockchain ecosystem and create apps. We encourage anyone with an interest in blockchain technology to develop apps that can solve real world problems for the community. We will be hosting up to 40 developers to join in this first of its kind Hackathon in Greece. We are also extending an open invitation to companies and government organisations to visit and observe the event.

The launch event will be capped off with a televised fashion show featuring professional models wearing GetNauti gear. We have hired a camera crew to be on island for the launch event to capture this historic moment. This fashion show is a pre-shooting for the Athena Model TV Show that will be hosted on Agistri in 2016.

We are excited to bring this revolutionary technology to Agistri and are grateful for the foresight of the Mayor, local businesses and citizens. This will be the first time an entire economic ecosystem has been experimented and deployed and we are looking forward to this historic event.

The ecosystem that will be deployed is both scalable and efficient, making it suitable for multiple use cases. In parallel with the Drachmae launch on Agistri, Brian Kelly Capital (BKCM LLC) will be making a seed investment in a new entity that will deploy this ecosystem globally. The new entity will license and implement new blockchain based economic ecosystems similar to the Drachmae Project. Currently, the entity anticipates targeting developing micro-economies in Latin America and Africa.

Commenting on the investment, Brian Kelly said, “With this technology we can deploy a fully functioning economic ecosystem which includes a banking system, a commerce platform and a currency. We are excited to be a part of this revolution.”

The new entity will be focused on deploying this technology to other countries, municipalities or organizations that need a fully functioning micro-economy.”

Also read: Nxt – the economy platform for everybody

1 thought on “NXT to power a full economic ecosystem”