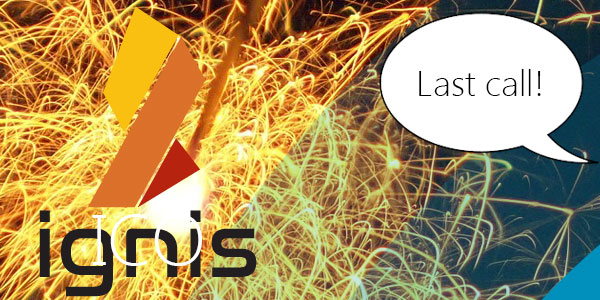 BTC is on a bull run, to put it gently. Anyone watching crypto charts and price indexes these days see the value of BTC (Bitcoin) skyrocketing up up up; resulting in most altcoins declining in value when pegged against BTC. This story also applies to NXT and ARDR, yet ARDR does extremely well in terms of fiat price.

The first child chain of Ardor, Ignis (named JLRDA in the ICO) is still for sale. Less than two days are left in the fifth and final round and it is not too late to participate. Millions of tokens are still available.

Nxter Magazine has followed and covered the twists, turns and the evolution of this decentralized ICO taking place on the Nxt blockchain in our ICO Reports, as well as in our weekly newsletters. Now we take one last look at the state of Jelurida’s ICO.

Live data from the Nxt blockchain

Was the ICO a Success?

Yes, millions of Euros were raised demonstrating public interest. In the first four rounds Jelurida, the company controlling the IP behind Nxt / Ardor / Ignis sold ~260M JLRDA tokens to a very eager public. The crowdsale was very popular in the first batches and rounds, with huge whales buying most in the beginning. But JLRDA tokens are still left over from the fourth round and it looks like millions will be left over from the fifth too. Buy orders are still flowing in daily, though not in the same tempo as in the beginning.

If you do NOT look at the price of NXT, buying now would seem like a bad idea.
But the fact is that NXT is currently the reference currency for JLRDA. You cannot ignore the NXT price.

When NXT decreases in value, so too do the JLRDA tokens. 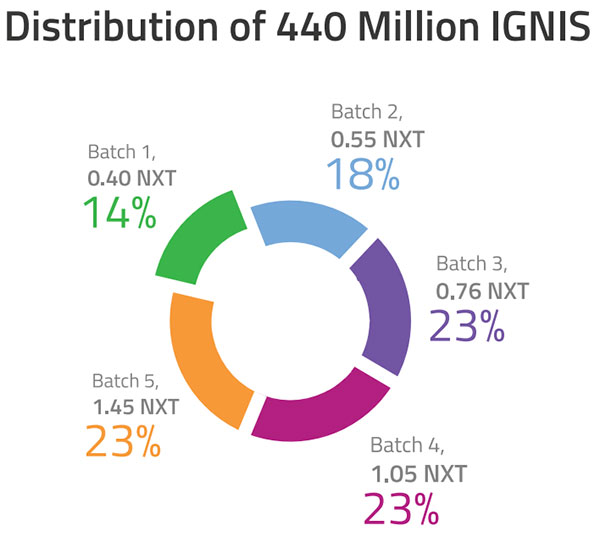 What investors invest NXT in is the transactional token of the first child chain of the Ardor platform. A featureful public chain with no restrictions, no regulation, fully decentralized, and with several new advantages added on top of the variety of smart transactions (inbuilt, tested and secure smart contracts) that Nxt already offers.

2) The IGNIS airdrop – you can have both NXT and IGNIS 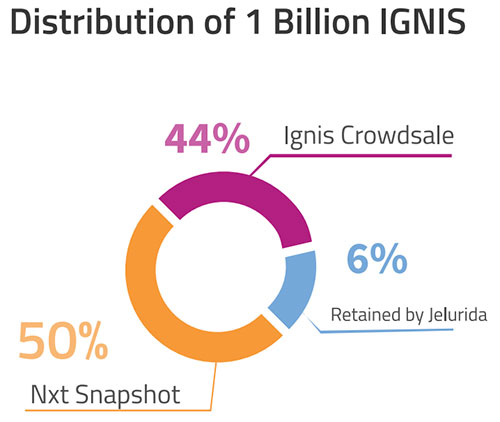 At the Ardor Genesis snapshot, half of all IGNIS tokens will be distributed to investors that hold NXT – 0.5 IGNIS for free per 1 NXT they hold in their account. So, they will get to keep their NXT.

Why would anyone sit tight and hold NXT instead of exchanging it for JLRDA? If NXT is expected to get dumped massively after the snapshot of Nxt’s blockchain this Xmas, isn’t it too high a risk to take?

Well, who knows, maybe it will not get dumped. Nxt is, after all, still an awesome blockchain 2.0 platform.

Why would Jelurida stop developing NXT, a stable and mature product with a huge potential? Rest assured, NXT has a bright future, it has been around for almost 4 years and will be around for a long time.

We won’t be able to sell private blockchains unless we have a successful public chain. We all realize this. NXT promoted Jelurida and Jelurida will promote NXT. The challenge is to create a win/win situation and we need your support for this.

And so, in Jelurida’s roadmap it reads:

It’s easy to clone Nxt. On Jelurida’s homepage, there is a tool to privately launch and test a Nxt blockchain. And in addition, a Nxt Creation Kit, which makes it a no-brainer to start a new public PoS blockchain that adheres to the JPL license. Wait, is this not open source? Yeah, it is, but as covered here, from Nxt NRS version 1.11.6 and forward, cloners must pay 10% of their new blockchain tokens to NXT holders. This is a defense against the devaluation of the NXT token.

And those that do not want to pay? Well, they can choose an earlier version, but it will not be upgraded.

The international bank, BNP Paribas, is known for using Nxt. After testing it they implemented it. And, for example, Accenture and the NSD (Russia’s National Settlement Depository) use Nxt for testing decentralized voting. And Jelurida will sell private blockchains. Will this devalue NXT? Is it bad? Imho no – it is another proof that Nxt is very, very, secure. For Nxters that use the public chain as well as for banks and the companies that will inevitably follow suit and implement a business solution based on distributed ledger technologies. As Lior said, “Nxt will be around for a long time.” 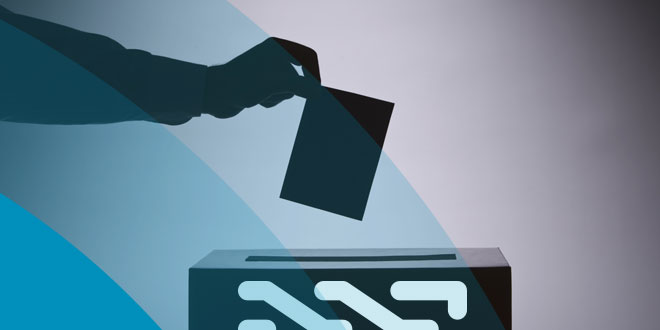 That is Jelurida’s treat. On top of your valuable NXT, you will receive an airdrop of 0.5 IGNIS per NXT into your account for free. Like a second Xmas.

3) Ignis is just the 1st child chain.
Ardor is a child chain platform. Someone will issue IGNIS 2, 3, 4 etc.

According to the roadmap, for at least the next year, all child chains will be issued through Jelurida. Yes, Jelurida, the same company that sells and holds a massive amount of IGNIS. The JLRDA tokens still in Jelurida’s account after the ICO will be kept by Jelurida and used as they see fit. And Jelurida has expressed no interest in devaluing them.

Actually, Lior Yaffe’s vision seems to be the opposite:

While the Ardor platform can have multiple child chains with similar features, only the Ignis child chain will be created with no restrictions.

Today’s blockchains are Jack of all trades, if you are interested in blockchain voting, your node will still process and store forever all the identity management, asset exchange, ico transactions, iot sensor data, social network messages and every other transaction ever submitted to the blockchain even if you don’t care about them. And this is the main problem that the industry needs to solve.

[Ardor’s] unique parent child chain architecture allows us to separate each application into it’s own child chain and only store the few transactions which are important to the POS consensus algorithm in the blockchain forever. All other transactions can be removed (pruned) and nodes will only track the recent state created by them.

Furthermore, in the future this architecture will allow nodes to focus on specific child chains. This way, we no longer have the requirement that each node process all transactions. Then like the Visa network does today, we can scale to global scale.

So rather than being copied onto other child chains, Ignis will stay unique, at least for a long time. An original non-restricted blockchain with the same features as Nxt, including shuffling of coins, assets and Monetary System tokens for user privacy, a totally unregulated marketplace and Asset Exchange, where you can distribute dividends (even other child chain coins) to asset holders with one click, execute polls among your asset holders, use Phased Transaction to create a DAO, and do even more than with Nxt, as Ignis will interact with all other child chains on the Ardor network. In other words, a great live reference blockchain, and a demonstration of Jelurida’s vision, work and worth, until …

Then there is Ardor.

We have three coins in play.

$NXT, $IGNIS, $ARDR – picking the right one to invest in IS complicated.

The good old proven, but still under-used NXT, a prime mover in its field: energy efficient, the first 100% PoS, featureful, a best fit for private blockchains and running in production with the international banking conglomerate BNP Paribas (money over borders), used by NSD and Accenture for blockchain based voting security. And cloned and seen on coinmarketcap under a few other names too.

Ignored by the crypto (Bitcoin) media for years, developed with no dev- or marketing-budget, Nxt is all this. And after the ICO has ended, Jelurida has collected the monies to breathe life into both marketing, further development, and new dev education. Should we trust them to do it? I think yes. Because 1) They can. And 2) They do hold a lot of NXT. 3) The more we build on Nxt’s public chain, the better a showcase for Jelurida.

Then we have IGNIS, dubbed Nxt 2.0; will it make Nxt obsolete? Buying IGNIS is buying into the evolution of the Nxt blockchain technology. Janus will move to IGNIS. Adel will. Gabriel Dusil is already doing a great job attending events and private business meetings, all documented here.

For those still asleep, Nxt is a full economical infrastructure on the blockchain. Ignis expands it and devs with just HTML, CSS and .js skills can easily build free as well as paid user-friendly decentralized applications on top of it and even access the whole Ardor ecosystem of child chains. All the inbuilt Nxt smart contracts have been tested in the wild and passed the test as unbreakable. But Ignis will be expanded further. Already when it launches on January 1st it will have lots of extra functionality. 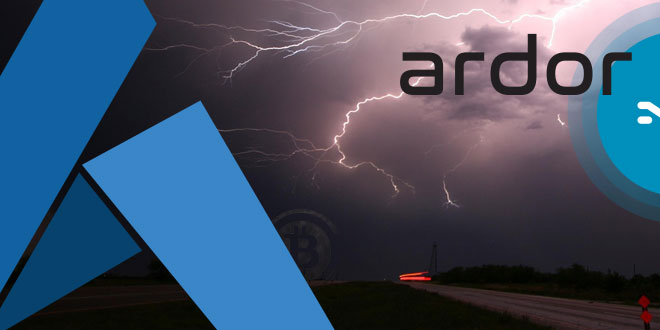 The Ardor Platform, ARDR the parent chain token. This is the token that will forge and secure all future child chains, the full Ardor ecosystem. Ardor will be able to run as a full node on phones, so the security of the network will be safe.

Bitswift will have its own child chain.

Ignis will, of course, run on Ardor and use ARDR.

There has been announced BTC and fiat-pegged child chains.

CBT Nuggets is buying 50M ARDR so they can be offering it for validated learning to all of their existing customers at cbtnuggets.com and plans to give away the equivalent of 100ARDR with every download of their new client along with profile creation.

Ardor is well described in the ICO Whitepaper and here.

You can see a technical comparison between Ardor and its competitors here.

This is just the beginning. There is money to hire more world class developers and fund a far-reaching marketing campaign. Also, if someone is dissatisfied, the code is open source and can be cloned, well if the JPL license is followed. A license good for holders. On December 27 Ardor’s source code will be released under the same JPL license.

So should I buy NXT or JLRDA? Or ARDR?

That is a personal decision.

One may not be better than the other, and in some way, they are all deeply connected.

The JLRDA crowdsale ends tomorrow. It will be the last chance to support Jelurida in creating our future, as well as the future value of all coins in the core platform. Remember, regardless of whether or not you participated in the ICO, you will receive a late Xmas present at the New Year of free IGNIS tokens equal to half the balance of NXT you have in your wallet. We are not here to give investing advice, merely to highlight and showcase the many successes and use-cases of the three tokens.

Thanks for reading along. Feel free to spread the word.