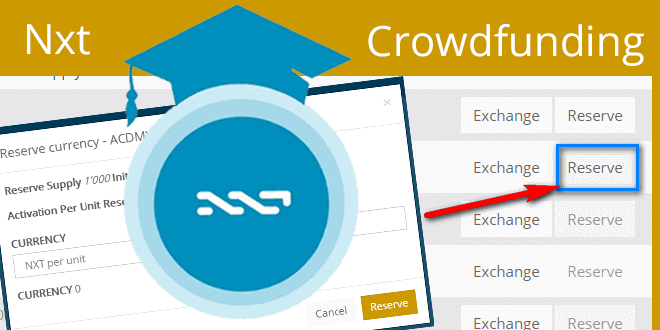 Let’s actively bring Nxt into every university and school all over the world!

Crowdfunding usually needs three actors: the project initiator, supporters and a platform connecting both parties. Crowdfunding websites exist only for 6 years. During 2013 $5.1 billion USD was raised by millions of individuals! However the biggest disincentive to using websites such as Kickstarter is their fees. Kickstarter demands 5% of the money raised as a fee, and payment processing fees are another 5%, which in the era of blockchain technology is a little difficult to justify.

Nxt recently released a new monetary system with a crowdfunding feature, which makes a third party – a platform – fully automatic and decentralized. Since January 2015 it’s finally been possible to organize a crowdfunding campaign via the Nxt client with all costs and fees totalling less than a half USD.

The very first example of a completely decentralized Crowd funding via Nxt Monetary System started at the beginning of February 2014, when a Czech Nxter, Petr K. Salsa, issued a currency: NxtAcademy with ACDMY as a code.

500,000 NXT (= 500 units) need to be raised during February in order to successfully finish the crowd funding campaign. If 500 units aren’t bought before block 370,000 (= 1st March 2015), all pledged NXT will be returned. If at least 500 units are bought, the funds raised will be used for maintaining Nxt Academy (= at least 1000 USD/month). More funds = more projects for students, more lectures all over the world, more external teachers, more printed materials.

Details and other info: http://nxtacademy.com/about

Nxt is an important part of the open source technology. Nxt Academy recognizes Nxt’s spirit and guarantees all content accessible for anyone, anywhere, for free. It is a long term project which focuses on providing free education for the students and children. Every teacher will be able to download and use teaching materials for their students. Everyone will be able to attend free online courses about Nxt from their home. Young people, as yet completely unaware even of the existence of cryptocurrency,  will be informed about Nxt via school bulletin boards and via lectures and student projects organized at their school.

The world of cryptocurrencies has got a huge enemy – ignorance. Society isn’t yet ready for the wider acceptance of the cryptocurrencies. Nxt will in time revolutionize many industries, but right now it is just a toy for geeks. Nxt Academy is going to prepare society for the Nxt crypto revolution by providing teaching materials and much more. Nxt Academy isn’t a commercial project, its existence, form and size depends on donations from the Nxt community.

Nxt Academy isn’t only a passive website with videos and texts. It actively propagates Nxt at schools, universities and student festivals. Nxt Academy will be targeting all bigger Universities and sending its materials to their students. Students will be working on team projects with their classmates, while Nxters will be mentoring them.

Teachers will be receiving teaching materials, infographics, textbooks and worksheets for children, they could even teach young kids about Nxt. It will be easy to download all sources and printed materials will be sent to the schools or handed out after the speeches / lectures at the schools and universities.

All content created by the Nxt Academy will be actively distributed to the other similar projects – Khan Academy, Coursera, Coin Academy, College Cryptocurrency Network… It’s about spreading the knowledge, Nxt Academy will try to have its courses at all of those sites and many others.

Nxt Academy will be supporting the crypto research

The database of the research/students papers will be very helpful for all cryptocurrency researchers. This side project will create a library with crypto-related articles saved at multiple platforms. With enough funds, Nxt Academy could provide student scholarships, grants or awards. The dream goal is to have a crypto thesis of the year contest during the Nxt Academy conference.

Before entering the Universities’ or Student festivals, Nxt Academy needs to prepare the teaching materials.

Online courses – Easy-to-use platform for everyone who will be able to learn about Nxt, its ecosystem, its ideas, its abilities. New fresh videos and edited videos will be followed by chosen articles and infographics.

Textbooks – If we want to get cryptocurrencies and Nxt into the mainstream, we need to prepare educational materials for teachers. Textbooks will be created by a cooperation with university professors and school teachers.

Worksheets – Children as well should have the chance to learn about the cryptocurrencies. We need to prepare the world for this new revolution. Worksheets, educational programs for children will be prepared by a cooperation with the school teachers.

After two weeks Nxt Academy raised 120,000 NXT. 35 Nxters decided to support the project with their donations. It is also possible to donate directly, you can send NXT to: NXT-W4FQ-JGAE-JHS9-3PMNR (from online wallets, exchanges…).

Nxt Academy is a project supervised by Petr Salsa, who has spoken about Nxt at 5 conferences and one University. A few other speeches at Economics Universities are being planned for the near future. Salsa attended all of the online courses about cryptocurrencies, such as “Introduction to Digital Currencies” by University of Nicosia, Coin Academy, Coursera, Princeton University and University of Virginia. He wants to devote his experience, skills and time to build similar courses about Nxt.

With Nxt Monetary System anyone can run a decentralized crowdfunding campaign.
Learn more about the Monetary System here: http://test.nxter.org/nxt-core-monetary-system/