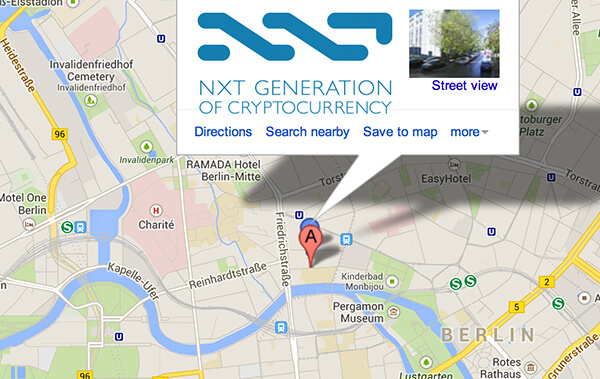 Bitcoin conf is like a scifi convention with business cards and almost without women. All of them are just nerds in a different stadium of age or wealth. I had to spend 12 hours in 11 buses to get from South Bohemia to Berlin, but all was OK, now snow, so no complications. Me (salsacz), l8rrie and Bitventurere bought network passes, so we could talk business at the conf  hall, while admiral.fu, our sponsor who got t-shirts for us, flew from Sweden and bought a ticket for sessions. I brought business cards, they were essential, + stickers and infographic. It was also useful, some people wanted to talk about myths… But there was no problem to talk about PoS distribution, all Bitcoin lovers now know PoW is not perfect. Bitventurer (Hamburk) brought flyers and one surprise and l8rrie (local), it was our secret weapon, a developer of Asset exchange with very fluent english and native german was very useful 🙂 Btw I was buying not only a conf ticket, but also a hotel by Bitcoins, right before the crash, so I was lucky to sell all my Bitcoins 😀

The job of Nxt conf ambassador is very exhausting, you spend all day by talking about Nxt with tenths of guys. So your legs suffer, your voice and if you are not using your native language, the brain is tired too. So after first day I even didn’t have any dinner, I just passed after I came to the hotel room. It is very different than homeoffice and such jobs should be paid by gold 😀 Especially if you are also dealing with real business and need to decide how much you can spend on bribes for conference organisators. So we gave away one Nxt t-shirt. And little more.

What were the hot topics?
1.   You can build new coins on top of Nxt. We would really like to have some application for that, so you can create a new coin by clicking at one button
2.   Green energy
3.   100% Proof of stake
4.   Zerocoin protocol, Asset exchange
5.   Decentralized apps – twitter, facebook, email, storage, all decentralized and built on top of the Nxt
6.   Decentralized leadership and community
7.   Blockchain shrinking
8.   Positives over Ethereum
9.   DACs, Smart contracts, Lego platform from Ethereum
10.   Decentralized Games, Poker

Which coins were at the conference?
–   Bitcoin – but only some miners..
–   Mastercoin – Mastercoin guys are very kind. We had nice chats, it looks like they are little disappointed with their situation. They have some plans to the future, but right now they even don’t advise to use it. So no competition, but very friendly guys
–   Nxt – 4 ambassadors + 1 guy from the topic, about 2 holders and 10 potential buyers, maybe more. Tons of people talked about buying Nxt so they could catch the train 🙂
How many naked ladies attended a convention?
– 0
I had a funny talk with a guy from Iceland mining company. But he didn’t know it. He was excited as he could answer my questions, but inside me I was rofling how screwed Bitcoins are thanks to this centralized machine. It is based on unfair pow mining that is much cheaper on Iceland. So it will become centralized. Another thing is, you can buy 1 ghash for a year for 8 Dollars. So it is now similar to Nxt. Buying their gigahashes is a proof of stake system, however leading to the centralization.

There weren’t a lot of journalists. But thanks to RT we got a nice attention on TV. A 4 minutes long spot about Bitcoins and Bitcoin conference was on air every hour in the news on RT. The spot from the conf was quite short and then with a little interview with some guy, but then the moderator went to the Bitcoin bar. I was quite surprised how sofisticated, informed and well instroduced were Bitcoins, however there was no place for altcoins or Nxt. Even the interview with BTC China guy wasn’t chosen.

The most interesting guy was probably the CEO from Cryptoventures, an experienced manager, who was born in Italy and the lived in Argentina, Spain and… London? L8rrie will surely provide much detailed info about discussed stuff. Nxt’s altcoins will become a currency in African states and in Casinos. This guy will help provide contacts. We need to provide an easy platform for creating and mainteaning such coins. So the new topic for Nxt article is definitely „How can coins built on top of Nxt’s platform become a national currency and how could they be used, mainteaned and regulated?“ + the same thing with casinos.

We talked with a lot of companies about coordination with Nxt. Or to get more dev contacts, we we would be able to build all decentralized internet on top of the Nxt. We intriduced Nxt to..30-50 people? So now we can cooperate with OpenCoin, Hive, BitAngels, Dots for Bits… Sadly there reren’t exchanges, only real life german and BTC China 😀 Also we have new contacts for crypto conventions, so we are invited to San Francisco (who will attend?), to Bitcoin Camp (Nevada?) and we also spent hours with the Texas guys. It was important to intriduce Nxt to all consultants, advisors and journalists, so now they can talk about Nxt to other more important persons. It was interesting to bank guys. There was a young ambassadors from Deutsche Bundesbank. They are trying to get to the cryptoworld somehow so they are researching the situation.

I am still too tired to think about it from the higher perspective. So just a little conclusion. We need to send 2-4 ambassadors to every Bitcoin conf/convention, it is really essential.