What is ‘Network Effect’ ?

Prognosis: The NXT valuation is settling for now around 6000 Satoshis on a moderate upward trend. This looks to be a more stable situation with less volatility than a couple of weeks ago. Two observations which would appear to support this are:

[1] – the previous heavily lopsided market depth has substantially balanced itself up around a price of 6200, suggesting that the bulk of the big sellers wanting out for the moment are now out and the bulk of those wanting in are now in. These are reflected in the moderate trading reach figures in both directions below

[2] – the very long range 12hr MACD turned positive around March 31st while the 4 hr remains in a stable upward if slightly converging trend, suggesting that we might have up to a week of stable prices ahead in the 6-7 range (an eternity in crypto-markets).

Reach on BTER at the moment:

DO TRY THIS AT HOME

Here’s an experiment for those of you with a modicum of curiosity, 3 minutes to spare and a working knowledge of wordpad, notepad or textEdit (on Mac).

Copy the 40 line code snippet from [http://nxter.org/create-your-own-nxt-client-experiment] and paste it into a text editor. Save the document to disk with a “html” extension (i.e. either just save it as text and manually change the extension to “.html” or save it as “my-nxt-client.html”).

Open the document in a web browser (just double-click on it or, alternatively, go to the FILE menu and choose open file). If you see a form, enter a NXT account number and click the “Go” button.

If this worked for you, you’ve just created your own NXT client that uses the NXT high level API ! (Application Programming Interface) (Your balance will be out by 2 decimals but just ignore that, it’s for true geeks to worry about).

Now have a look at this page and see all the other stuff you can do just by replacing the command “getBalance” in that little NXT client you ‘wrote’. http://nxtwiki.org/wiki/The_Nxt_API#Asset_exchange_operations

Now part 2 of the experiment (Everyone can do this bit) answer a few questions with a “yes” or “no”:

If even 1 in 10 readers scored at least 1 point out of 4, then you’ve just added to the favourable “network effect” for NXT.

Network effect is the gold dust of cryptocurrencies and is what more than anything affects the valuation. However, as your eclectic correspondent sees it, there are 2 distinct types of network effect in play and we are rapidly approaching a point in the history of NXT where one diverges from the other.

This is where people are interested in the intrinsic nature of the “coin” itself. For example, its name , technical characteristics, its popular following, its price, logo and gorgeous website. Primary network effect clearly has a limited lifetime because all these things have one quality in common – ** novelty **. We can basically sum up primary network effect therefore as ‘novelty value’.

This is where people are not interested in the “coin” itself but in something else completely. However, that “something else” happens to have a favourable dependency on the coin or infrastructure such that it supports its value as long as the “something else” is in demand. The obvious one is currency. If you go to a kid’s funfair and they use those plastic chips that you buy at a kiosk to get on the rides, you’ll pay 100 times more for its monetary value than you will for its utility value in the hardware shop. Nothing to do with intrinsic value of plastic chips -it’s exactly the same plastic token- and everything to do with their network effect in the ‘funfair economy’. You need the “chip” to get the ride.

The problem for 1st generation “coins” is that in the absence of monetary deployment, there is no secondary network effect. All that remains is a residual speculative value based on potential use as a future currency. The obvious secondary network effect for “2nd gens” like NXT, however, is services and we are at last starting to see evidence of this in the trading technicals.

The other day I was idly mulling the 12 hr chart for doge and smugly patting myself on the back for not having invested when to my horror, I realised something quite startling. NXT was tracking Doge with a perfect 4 day delay like a bloodhound on the trail of an injured rabbit. Then, equally as profoundly, around the 17th of March the two profiles start to de-couple. All this time I had been thinking that NxT’s valuation was so different from other coins – prospect of 2nd generation services, new source, proof of stake etc when in fact we’ve actually just been riding the same “novelty wave” as every other coin !

What this also means however, is that we are now entering an important 2nd phase. The de-coupling, if true, means that from now on NxT’s valuation will be much more dependent on dry, boring secondary network effects like that of the little technical demo at the start of this report. To illustrate this, in the graphic below, I’ve superimposed the NXT 12 hour chart from Bitcoinwisdom on top of DOGE’s 12 hour but with a 4 day displacement. Up to the 15th March it’s almost a perfect fit but with the impending launch of NXT asset exchange we are seeing the beginnings of a de-coupling from that early unsustainable “novelty coin” profile. 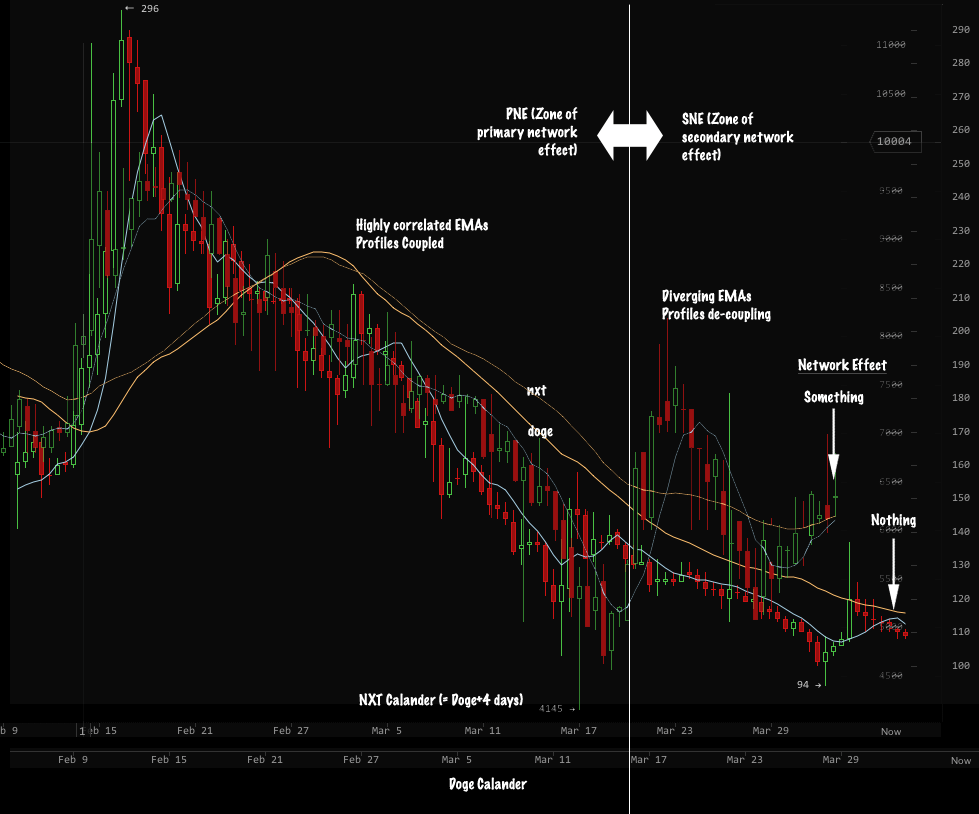 If NXT can reach escape velocity and leave the gravity sphere of that diminishing primary network effect then it will be one of the first crypto currency projects to do so since Litecoin. Even the greats like Peercoin and Primecoin are struggling to manage it. It’s important therefore that the focus now shift from “this is a great coin because it’s x-y-z POS great community mumbo jumbo” type promotion to much more practical priorities like “I’m going to distribute my software licenses on the NXT network”. Screaming about how great NXT is on Bitcointalk will no longer have the same effectiveness as we are “out of the novelty zone” and new projects have arrived to take its place. We must now fully embrace the next phase and look for, create and promote genuine secondary network effect for the NXT network.

Here’s an example of why this might just succeed. You can see from the little client-demo above how easy it is to write applications which access NXT services like the NXT asset exchange. What you might not be aware of is that it will cost you 1000 NXT to actually publish an asset !

This has quite profound implications because it means that the project effectively has a business plan. Not only is there a service that can be charged for but it can only be *paid for* in NXT. So it delivers a double positive to the valuation: utility value + monetary value.

This is a clear and unambiguous secondary network effect.

I’ll finish with just a brief mention of a recent development that I think will have a big impact on NXT in the near future. There was a significant event recently where a well known figure of the Bitcoin tech-head circles carried out a campaign of extortion against the Auroracoin development team, threatening to deploy an army of botnets at his disposal to attack the coin via an expoit he had discovered in the Kimoto Gravity Well algorithm for accelerated difficulty adjustment.

The threat was considered serious because of the relatively low level of hashing (mining) power available to that coin at the time and the individual succeeded in having his conditions met – which were that the development team publicly acknowledge the exploit and impliment a fix.

Whatever the ethics of this whole episode, it has succeeded in catapulting the relative benefits of proof of stake coins into the spotlight in a very big way. There has even been speculation around the safety of all POW coins except for Bitcoin and Litecoin which have elephantine amounts of hashing power available to protect their networks. Add to that the fact that it comes hard on the heels of “operation sh*coin cleanup” which is essentially a co-ordinated attack on proof of work coins by systematically mining them and selling them on exchanges for proof of stake ones.

So we can look forward to interesting times ahead. In this respect, note that Doge is NXT’s contemporary. We can therefore use it as a reference to measure how much secondary network effect is managing to propel us out of the ‘danger zone’.
Keep a close eye on that divergence pattern as a basis for future trading strategy. (Health warnings apply  ).

My sense of deja vu just blew a fuse. There’s just been a major melt-up of NxT over on BTER. After reporting that the market depth was nice & balanced, the whole order book got bought right up to nearly 9000 satoshi within an hour of filing this report rendering my earlier market depth report as obsolete as a dodo. I’d like to write something about metorites blowing a hole in the field of play, false sell walls, tides and swimming traders, but I think I’ll just refer you to March 22nd’s report which describes it perfectly !

It seems that around 1.6 million NXT have been bought over a period of 2 hours in 8 discrete trades. It’s not clear if it’s a single buyer, but given that it’s all on the one exchange and that the buyer didn’t seem overly desperate to optimise the trade over several exchanges, it seems likely.

They made their first move at around 20:30 UTC, scooping up around 700,000 NXT, pushing the price to 7300, roughly as predicted by the market depth analysis at the start of today’s report. They then held fire to allow liquidity to re-emerge at the lower levels before hoovering up another 220,000. This time liquidity was getting thin and they had to take it to 7500, with another 175,000 volley of buys following on 10 minutes later.

Finally, another 320,000 worth of asks was bulldozed through between 22:00 and 22:30 to round off the rally bringing the price to a five week high of 8936. Once again there’s now a gaping spread in the order book. It took days for the last one to ‘heel’ while traders struggled to decide which end of the gap was the “right one”. This one’s twice the size – the Grand Canyon springs to mind.

Meanwhile, NxT’s alter ego – Doge – went the other way and is nearly back at its last dead-cat-bounce level of 94, so there’s your divergence right there folks.

Does someone know something that I don’t or is this just a refugee from the Bitcoin crash with some loose change to play around with ? 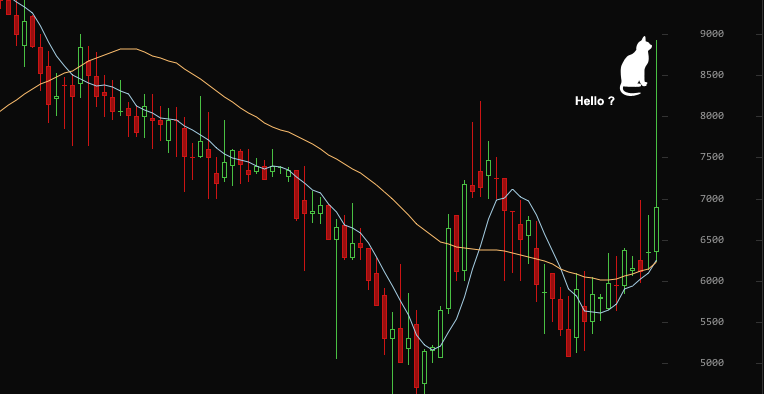