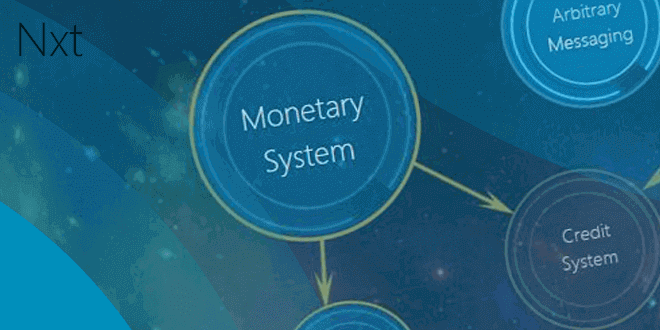 Nxt’s Monetary System allows users to create new decentralized currencies on top of the secured Nxt blockchain. New coins are highly customisable, with a wide range of parameters that can be set to govern their properties and use.

The Nxt Monetary System (MS) enables the launch of altcoins without going through the trouble of bootstrapping the currency with its own blockchain and network, thereby removing a major impediment to easy, real-world adoption and use of different customized cryptocurrencies.

The ultimate value of a new coin is determined by the market, depending on adoption and demand, and by the parameters set by the issuer. However, coins may also be created by ‘locking’ a certain amount of NXT, thereby giving a floor value to the issued currency at which they can be redeemed for NXT if desired.

With Nxt, new coins are highly customisable, with a wide range of parameters that can be set to govern their properties and use. It is possible to launch an MS coin that is distributed by proof-of-work, but secured by Nxt’s PoS algorithm. It is also possible to create fiat- and commodity-backed tokens for particular real-world applications.

These allow for the creation of bespoke and niche currencies for highly specific applications, crowdfunding coins, ‘regular’ altcoins, reward points, coins pegged to fiat currencies or precious metals, while also being a stepping stone to new future Nxt features, such as p2p loans, meaning that Nxt can become the underlying tech for a completely decentralized banking system.

MS can be explored in the Nxt testnet, ask for testNXT here.

The main net NRS release that will implement the MS System has also been released. Monetary System will be activated with block 330000, and nodes not running 1.4.5 or later will be on a fork.

Install NXT.
A guide to the NRS Client interface can be found here.

Monetary System offers greater exposure to NXT as the machinery that powers financial transactions, over and above its utility as a currency; however, this does not imply that NXT itself will become worthless. NXT remains a ‘decentralised store of value’, with fixed supply. MS currencies may become something akin to a decentralised credit system, meaning that users transact with MS coins but all of them depend on NXT for their ultimate utility.

Of course, this does not mean that MS will not catalyse a shake-up of the NXT ecosystem, providing an impetus for the redistribution of existing NXT wealth, as Come-from-Beyond writes:

‘In the beginning we will have an epoch of instability when hundreds of currencies will pop up every day. After a while some currencies will become more and more popular, but the whales will have their wealth dispersed among thousands and they will get only a fraction of initial wealth in the most popular currency.’

The Monetary System is necessary because different currency properties are suited to different applications. Having a series of currencies that fit the needs of the market are the obvious solution to the one-size-fits-all problems of both fiat and any single cryptocurrency. For example, as Come-from-Beyond also writes:

‘Having a fixed currency supply (like Bitcoin and NXT) isn’t ideal for all situations. Fixed currency supplies make a great ‘store of value’, but they make lousy credit systems. The Monetary System is simply another tool to allow people to create local currencies to break free of centrally controlled fiat.’

NXT will be bought by those looking to create currencies – it will not be used to purchase alternative currencies (as is presently the case).

‘NXT will have one specific use case only: to enable transactions. Nxt Monetary System is about separating power from economy. So, we can basically move the NXT Economy from this platform to another one if something is wrong with NXT or to penalize forgers if they misbehave.’

MS enables a series of far-reaching developments, including:

The following descriptions are taken directly from MS documentation as it stands at the time of writing. Documentation may change without notice. Latest version can be found here: https://bitbucket.org/JeanLucPicard/nxt/issue/205/monetary-system-documenation

The ‘Currency’ entity is the basic building block of the NXT Monetary System, currency has a unique name and code and uniqueness is guaranteed by the protocol, currencies can be deleted and their code can be reused under certain conditions.

CLAIMABLE – currency units of reservable currency can later be claimed at the same NXT per unit rate reached when reserving the currency. The ability to claim a currency at a certain rate imposes some practical limits on the rates at which users would want to exchange it. However claimable currency can also be exchanged if only for the purpose of exchanging the whole currency supply, so that the currency can be deleted.

MINTABLE – currency can be minted using proof of work algorithms in much the same way as Bitcoin. Unlike Bitcoin mining, minting currency does not secure the network (this is done by NXT). Minting is used solely for creating new currency units and serves as the only mechanism to increase the number of available units after the currency issuance.

Properties are combined into an Integer bit mask designated as the Currency type.

Since the available currency codes are limited to 3, 4 or 5 uppercase letters, the total number of codes is limited to 26^3 + 26^4 + 26^5 – 1 = 12355927 unique values (The code “NXT” is reserved), it is likely that some of these codes will have value in themselves. Therefore deleting a currency is possible under certain conditions depending on the currency type. Users may re-issue a currency, or delete a currency and then issue a new currency, with the same code but with different properties. In order to delete or re-issue a currency an account must poses all the currency units (and additional conditions apply based on the currency type)

The only way to create new currency units after issuing a currency is using proof of work minting. Other methods of creating units are susceptible to denial of service attacks and/or sock puppets and are therefore not allowed. The controllable currency type provides a partial solution for creating new units, by allowing the currency issuer account to treat her supply as a treasury and only consider units outside of this account as the total currency supply. This approach requires users to trust the currency issuer which can increase the currency supply at any time.

Users can issue minting requests in order to mint additional currency units. Each minting request triggers a hash calculation based on the submitted data and the currency hash algorithm. The resulting hash code is compared to the target value derived from the current currency difficulty. Minimal and maximal currency difficulty values and minting algorithm are specified when issuing the currency and cannot be changed later. The expected number of hash calculations (i.e. difficulty) of minting the first unit is 2^minDifficulty while the difficulty of minting the last unit is 2^maxDifficulty. Difficulty increases linearly from min to max based on the ratio between the current number of units and the total supply. Difficulty increases linearly with the number of units minted per CurrencyMint request, small minters can mint only a few units per request while large minters can mint large number of units per request.

The number of units per minting request is limited to 1/10000 of the total unit supply. Minting is limited to a single minting transaction per block/account/currency. Currency issuers can specify initial supply of units as a ‘pre-mint’ supply assigned to the issuer account then use crowd funding by making the currency RESERVABLE and EXCHANGEABLE.

Once the currency becomes active the delta between the current supply (reserved supply) and total supply can be minted. The NRS provides a Java based, reference implementation minter, which can be used for minting. In practice we expect users to enhance this minter to calculate hash codes using their Asics or GPUs, trying to match the current target, and when solving a hash, to submit a currency mint transaction (thus paying a fee).

However the hash code is smaller than the target, the currency units are credited to the sender account.

The combination of RESERVABLE and CLAIMABLE properties can be used to allocate initial value for a currency by locking NXT. Once the currency is activated the reserved NXT are locked and the only way to release them is to claim back the currency units in return for NXT. This provides the currency with a value based on the locked NXT balance. Note: locked NXT do not participate in forging, therefore, in theory its possible that a large amount of NXT becomes locked as a currency store of value thus reducing the amount of NXT used for securing the network; we are aware of this problem and will monitor it closely. We do not expect this to become a major problem any time soon.

The combination of RESERVABLE and EXCHANGEABLE properties can be used for crowd funding; in this configuration the NXT balance reserved by founders is not locked, instead it is sent to the currency issuer account once the currency becomes active. The issuer can use these NXT for its operations and the founders cannot claim back their currency units, only exchange them based on the published exchange offers. Currency issuers can specify the initial supply as ‘pre mine’ and the founders get to share the difference between the reserve supply (also named ‘pre-activation’ supply) and the initial supply.

Currency issuance fee is based on the length of the currency code:

Re-issuing an existing currency with different properties costs 40 NXT regardless of the currency code length. All other currency transactions (as of today) have a fee of 1 NXT.

Currency is measured in units and like assets has decimal positions, however the blockchain maintains currency balances as a whole number (QNT). Therefore, for example, in the case of a currency which has 2 decimal positions and the client has reserved 123.45 units, the ‘units’ value submitted in the API call should be 12345. APIs using NXT balances should send the value measured in NQT as usual. When specifying ‘rate’ in the API, it calculates the ratio between NXT balance in NQT and currency balance in QNT.

This section is relevant to API and client developers.
https://bitbucket.org/JeanLucPicard/nxt/issue/205/monetary-system-documentation

Nxt Monetary System is only one Nxt CORE feature.