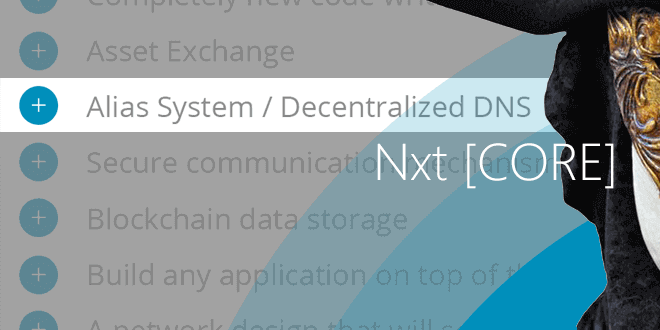 The Alias feature was released with block 22,000, on 22nd of December 2013. Aliasing is a decentralised Domain Name System that allows NXT users to register a string of characters and point it to anything.

In simple terms, Aliasing allows one piece of text to be substituted for another, so that keywords or key phrases can be used to represent other things – names, telephone numbers, physical addresses, web sites, account numbers, email addresses, product SKU codes… almost anything you can think of.

As soon as Aliasing was enabled, Aliases with commercial potential were grabbed by NXTers who hoped that they might one day be able to sell them on at a vast profit – just like domain squatting on the web. Brands and big corporation names were bought for the bargain sum of 1 NXT – along with a lot of sex-related aliases, of many and highly diverse permutations. Later, a bot was even used to suck up every word of up to four letters that hadn’t already been registered.

Send NXT and messages to Aliases

Whilst these early ‘squatters’ are still waiting for their rewards, the immediate use for Aliases is simply to make it easier to send NXT. Thus, by registering an alias and pointing it to a NXT account address you no longer have to specify that address when sending coins or messages to it; instead simply send the coins and messages to the alias and they will be received by the NXT account. As an example, writing ‘nxteracc’ in the recipient field will look like this:

Another use of the alias system is that it enables you to quickly distinguish between different NXT accounts.

Aliases can also be set to point to a URL.

Chrome and Firefox browser plugins that use the Alias system to replace domain names have been developed – making it possible, for example, by entering nxt:google in your browser, to go to Google.com, or by entering nxt:nxter to surf to NXTER.ORG. Unfortunately, these plugins haven’t been kept up to date.

Another use case is linking aliases to .torrent files.

Alias registrations are made in the Nxt client. Enter your preferred alias name and the type: URI, ACCOUNT or OTHER (the alias can contain any data you want).

Aliases can be transferred and traded, just like assets. Some are put up for sale on the NXT Marketplace, but there is also a built-in SELL option within the client. You can set a price and if someone tries to register that Alias, they will see your offer and be able to buy it or contact you directly. The trade is automated, again as it is with assets: On payment, the buyer receives the Alias, and the payment is transferred to the seller.

With NRS 1.4, Alias deletion will be enabled. (This is a relatively trivial matter, which is just waiting for the UI work).

One use case could be a business who issues an asset and sends a lot of messages to the investors of this asset. With namespaced aliases each message could be a namespaced alias, viewable in a client, for example the MOFO Wallet. Now the investor could search per timestamp or partial key ranges and load all announce messages (and only those) in one call.

Another use case, which is available as a demo plugin in MOFO Wallet, is a strong Blockchain authenticator that, for example, allows a person to identify himself by decrypting some verified data about himself in the blockchain and send the decrypted data back to the merchant or entity who asks for identification.

Another practical application of NXT Aliasing is described in the article ‘Nxt aliases as Hyperboria DNS’.

‘Hyperboria is a connection of local meshnets, which works as a self-organizing network which itself builds routes between nodes. It is currently using the Internet to connect nodes / local meshnets but it is designed to run independently of the Internet.’

Nxt and Hyperboria community member Slothbag explains his use of Nxt aliasing:

‘Up until now Hyperboria has not had any decentralized DNS solution. I created a p2p DNS solution for the Hyperboria network to use Nxt aliases as the domain->IP resolution. I prefer Nxt’s alias system, it’s pretty much the same as Namecoin but without the wasteful mining, and with heaps of other cool Nxt features thrown in.’

You can read more about NXT and Hyperboria here, and there’s a 1000 NXT reward on offer for Nxters running a Hyperboria node. There are currently about 40 Hyperboria domain aliases registered in Nxt.

NXT is so full of functionality that something as simple as Aliasing often gets overlooked. In fact, it’s a powerful feature that has great potential – albeit that will only be fully realised some time in the future.

The next article in the Nxt [CORE] series will explore the Nxt Arbitrary Message (AM) feature.

Nxt is a versatile, open source cryptocurrency platform. In this Nxt CORE article series we will dive into the main 2.0 features of Nxt. The first article was about NXT, the token itself. Read other articles from the Nxt [CORE] article series.