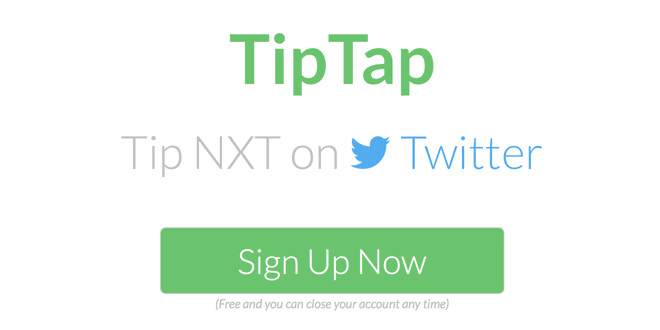 NxtHaus, a London based NXT and Bitcoin wallet and exchange, has recently announced, what they call ‘one of the key applications in increasing the adoption of Nxt: TipTap.’

NxtHaus is a Nxt and Bitcoin wallet that makes it possible for you to safely store your coins in order to make them available to you at all times, anywhere on any device. In addition to that, you will be able to easily acquire Nxt and Bitcoin within 10 minutes with your Euros and Dollars.

There are several ways through which you can acquire Nxt or Bitcoin at NxtHaus. The simplest option is Sofort Banking which takes less than 10 minutes and directly connects with your Bank Account. The other option is a SEPA Wire Transfer to our Banking Connection which takes 24 – 48 hours. If you are in the right location you can also send an International Wire Transfer.

TipTap is a tipping application that makes it possible for you to tip anyone on social media and thus show your support, appreciation or even your affection to someone simply by tipping them. In the recent months tipping people on social media has become increasingly more important, and we at TipTap treat it as the single most powerful networking tool that drives attention. The best of all: The service is completely free of charge. Forever.

Unlike other tipping services, TipTap uses the Nxt blockchain to facilitate the tipping micro-transactions, thus it doesn’t rely on any centralized ledger. Currently TipTap is compatible with Reddit, Slack and Twitter; 3 of the largest and most used platforms today.

To get this moving, an official Tipping Fund of more than $2200 (200.000 NXT) is paying weekly prizes to tippers who join @ http://www.wetiptap.com and use the service to spread NXT: