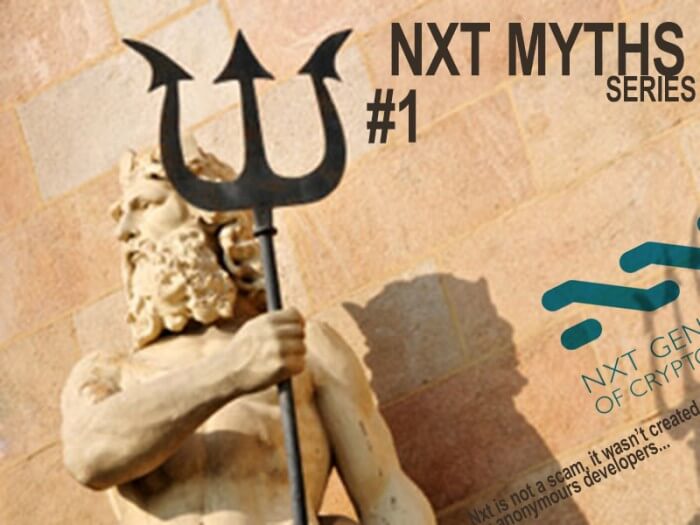 Nxt is not a scam

Nxt was invented by BCNext, who is a programmer at the age of 35+, who lives in Europe.[1]
He is a veteran member of Bitcointalk forum, but he stays anonymous like Satoshi Nakamoto.[2]
He can still reveal his identity, as he promised.[3] BCNext prefers to work on creating the project alone. He paid a team of core developers to help him with the client and create some functionalities like decentralized exchanges.
One member of the core development team Come-from-Beyond was paid by BCNext to work on Nxt from October 2013 till April 2014.[4] Come-from-Beyond is a 34 years old programmer from Minsk in Belarus.[5]
On January 2014 joined Jean-Luc a core team as a non-paid programmer.[6] He has a Phd, probably comes from Switzerland (or France) and already celebrated his 30th birthday.[7] Jean-Luc’s duty is to work on the code. Jean owns nice amount of NXT, that’s why he is programming for free, for the benefit of his own investment. BCNext was only an inventor, others will continue on his legacy and rewrite his ideas into a better looking Java codes.
After the release of the source code started many developers with code corrections. A few Greek IT experts from Thessaloniki and Athens are being paid for reviewing the code by the original stakeholder Klee who is managing them.[8] Klee spent a huge part of his Nxt on donations, bounties and giveaways.[9] He doesn’t hide his real identity, so he is moderating Facebook group Ubiquitous Cryptocurrencies under his real name.[10] The names of his team were also revealed. There were only 8 original stakeholders who paid 1 Bitcoin during open IPO.[11] Each of them got 50 million NXT, Klee is one of them. In January 2014 only 4 of these 8 original stakeholders own more than 30 million NXT.[12]
There are at least seven developers who are working on the Nxt’s applications fulltime: Abuelau, ferment, nexern, NxtChg and Graviton with his assistant, who helps him with the biggest Nxt exchange. This list isn’t finite, there are many new Nxt developers, like Marcus03 or wesleyh with their fantastic apps. There are tenths of helpers, translators, authors of articles, but people who said that they “work” for Nxt fulltime or at least halftime are: Joefox, Opticalcarrier, Pinarello and Salsacz.
500 different people had already been discussing at the main Nxt thread in Bitcointalk.[13]Once there were 93 active nicks in last 3 days. In the middle of January they reached 20.000 posts at the page of 1000. The statistic from the end of 2013 shows the biggest spammers of the Bitcointalk topic: Come-from-Beyond (2005), laowai80 (460), klee (324), smaragda (304) and opticalcarrier (211). 15.000 people own Nxt account, this number rises by 200-400 every day.[14] 500 users own more than 100.000 NXT, 2.000 stakeholders own more than 1000 NXT.[15]
Nxt network of peers has got members from all over the world. Most people come from the United States, but there is also a big community in Germany, Hong Kong, Russia, United Kingdom, Japan and Netherlands. There is one user from Iceland, Jamaica, Panama, Ethiopia or Israel.[16] Some of the Nxt Wiki pages have already been translated into 11 languages.[17]
Nxt is still a small group of individuals who have no centralized place. Nxt is a decentralized currency, that’s why there are more Nxt forums, exchanges, sites, social media profiles and also marketing groups. There will never be any main leader. All decisions in Nxt will be based on democratic voting.

January 2014:
Q:  Why was the initial funding cancelled suddenly with few people?
A:  I wanted Nxt to be launched by the community, not by a single person.  Success of Nxt is supposed to be achieved by work of a LOT of PEOPLE.
Q:  How would you solve problem with scam accusations according to “unfair” distribution Nxt to 73 big stakeholders?
A:  This problem can not be solved.  Even if we had a million stakeholders the rest seven billion people would call this unfair.  A world with the money can not be perfect.
Q:  What are the most important 5 things the community should do, in order to properly support Nxt in the next 6 months?
A:  Review all my ideas, they might be flawed.  Avoid centralization.  Do not pay much attention to the price of 1 NXT measured in fiat money.  Remember that half-measures is a way to nowhere.  Do not trust strangers on the Internet, especially if their nickname is “BCNext”.
November 2013:
Q: how many bitcoins are you going to contribute? (are you going to keep the coins you contributed yourself?  or you will take a creator cut (certain %)
A: I don’t know how much I will contribute.  This depends on the price of Bitcoin and some other factors.  These bitcoins, like the others, will be used to pay bounties for development.  No creator cut.
BCNext’s citations:
A lot of time was spent on talking, the outcome did not satisfied me.  That is why now I am working alone.  The things are implemented much faster this way.[18]

What others said about BCNext

Come-from-Beyond:
„I don’t think BCNext is interested in money. He spent more than he raised funds.“[19]
„With all my respect to BCNext, he is too paranoic about FBI/aliens/illuminati, they r not interested in kidnapping of yet-another-cryptocoin creator. I believe that was (unsuccessful) PR attempt. Fortunatelly, we don’t need him after the launch.“[20]
What is BCNext?
Next is next.
Salsa also thinks that „BC“ comes from the Proof of Stake article and referrs to „Beyond Cryptocurrency“.
What else do we know about BCNext?
He often uses special phrase „can not”. He is a genius who doesn’t care about money or glory.
BCNexts likes symbols:
Now we know about 3 symbolic numbers hidden in the world of Nxt:
–       3 January – the release of Nxt happened 5 years after the release of Bitcoin.
–       21 Bitcoins – The IPO was stopped in the time when were gathered 21 Bitcoins, i tis 1/1000.000 of the all existing Bitcoins from now on.
–       Anonymous BCNext – BCNext plays the same role as Satoshi Nakamoto. We don’t know who they are.

[1] This guess is based on assembler style in the code (Come-from-Beyond: „I noticed the same things, the code is written in back-to-90s style. The author definitely used to code in Assembler.http://www.reddit.com/r/nxtcoin/comments/1toz2d/warning_nxt_source_code_is_very_low_quality/ceafrr3) and the statistics of the posts of BCNext: https://bitcointalk.org/index.php?action=profile;u=152600;sa=statPanel.

[5] https://bitcointalk.org/index.php?topic=113906.msg1230551#msg1230551. On the Chess site he also filled a Birthday, but since i tis January 1, it is probably fake due to the quick registration process http://www.chess.com/members/view/Come-from-Beyond.

[7] Some people say Jean-Luc uses french accent in his english, someone saw a new client in the peer list from the Switzerland, he used a CET in his signature. CET referrs to the timezone in the central Europe – from Spain to Slovakia. He also used a russian email, but they don’t use CET in Russia or Belarus.The information about Phd and age got author of this text by personal message from Jean-Luc.

[11] The list of original stakeholders is hardcoded to the sourcecode. More in the chapter 3 or: Salsacz, Where is Nxt from Original Stakeholders?, in: http://nxtcoin.blogspot.cz/2014/01/where-is-nxt-from-original-stakeholders.html.