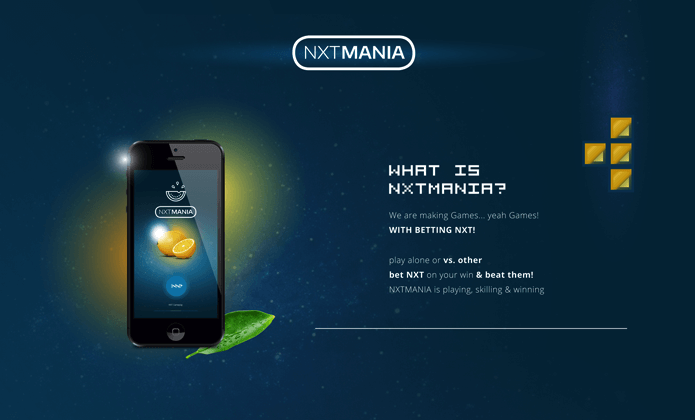 THIS ARTICLE IS ONLY KEPT FOR HISTORICAL REASONS. THE PROJECT IS DEAD.

Backends are ready for take off. Next steps:1. Beta-Testing between Backends and Apps (Android & iOS 6+7)2. Bugfixing3. RollOut on iOS-App-Store & Google Play4. Waiting for release

Nxt Mania Games is a startup game company specializing in making classic games like Tetris (Nxtrix), Space Invaders (Nxtvaders) and the like, available for iPhone + iPad. The twist? You’ll be able to bet NXT on your win and play against other Nxters.

If you bet 50 NXT, and another player joins the room and accepts, you will play against him. The winner of the game gets 98% of the betted amount, which means in this case he will get 98 NXT, as 2%  are split between the investors in NXT MANIA GAMES.

There’s quite some buzz going on in the crypto world these days, after Apple’s announcement that Apps may facilitate transmission of approved virtual currencies (provided that they do so in compliance with all state and federal laws for the territories in which the app functions). Phew. Now is this an opening for Bitcoin, NXT and the numerous altcoins, will Apple actually accept those in AppStore in the near future, or is the maneuver simply a preparation for the launch of Apple’s own currency, iMoney? Nxt Mania Games are on top of the situation and promises that if Apple continues to reject the main crypto currencies, it will not stop them. A possible tweak could be that you play for “tetrispoints” instead of NXT..  you will be able to change those points into NXT 1:1 online on your user panel whenever you want.

To join the discussion of this, visit: https://nxtforum.org/news-and-announcements/nxt-mania-games/